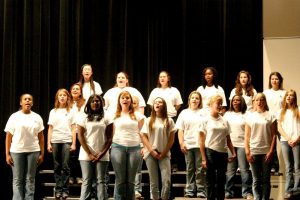 Singing is one of the most accessible forms of making music. At Voice of Hope we believe everyone can sing, however strongly some may doubt their ability.  The dynamic approach adopted by the choir is to tap into the hugely uplifting medium of gospel music with its striking rhythms and positive lyrics of hope and encouragement.

Using songs in this fashion is not new, as songs have been used in different cultures throughout history to promote health and wellbeing.  Kim Samuels, the Voice of Hope choir director, has a very strong background in teaching gospel music to groups of mixed abilities. She uses her vast experience and diverse repertoire of songs to engage choir members to have fun as they learn.

But singing in a choir is more than just a bit of enjoyment. It’s been clinically shown that it benefits your wellness: from getting more oxygen right into the blood, to enhancing the circulation of feelgood hormones and also improving other aspects of personal health.

Singing in a choir can increase your mental health and wellness, a brand-new study has found. Researchers carried out an online survey of 375 people who sang in choirs, sang alone, or played team sports. All three groups showed enhanced wellbeing but those who sang in choirs stood out as receiving the greatest benefit and seemed to find singing in a group more  “meaningful” than those from the other groups.

So just how can singing in a choir benefit you?

Heart rates are directly affected by the rhythm and melody of music, and reducing the variability of the heart rate has a positive effect on one’s health.

One study involving participants who had been diagnosed with depression found that some of them no longer met that diagnosis following their involvement with a choir.

Other studies have pointed to the impact group singing has on boosting oxytocin levels, which help control stress and anxiety sometimes linked with cancer.

Lung cancer patients engaged in choral singing had greater expiratory capacity than people who did not.

It has been suggested that the reasons for the improvement in the strength of one patient’s voice who had been  diagnosed with Parkinson’s was deep breathing and the extended use of the vocal chords.

Any group activity proves to be beneficial for feelings of social well-being.

People who participate in a choir enjoy a greater feeling of togetherness and being part of a collective endeavour than others involved in different social activities.

Even if the quality of singing produced is “mediocre,”  there is still a prize just for taking part!

How can we help you?

Get in Touch with Us

Thank you for your message!

or reach me via these social channels